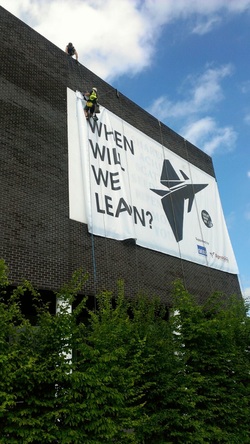 We worked with Signarama, the world’s largest sign franchise, on a media awareness campaign between 2007 and 2014.  Initially our brief from the Head Office Team, was to re-establish links with the sign trade press and to work with the franchisees to identify and develop stories that could be used to promote Signarama in the wider media.

Working on a very tight budget we utilised a strategy of using news stories to promote Signarama.  In order to achieve this we developed a relationship with the UK franchisees.  Following a period of absence Signarama appeared regularly in the news pages of the sign trade press.  We worked with the UK team to support new franchisees through the preparation of press releases to announce the opening of the new stores.  We used the stories to generate coverage in other appropriate media.  For example a project undertaken for EasyVan.com generated coverage in the fleet news press; a project for Buckinghamshire Fire Service was reproduced in the emergency services trade press and Signarama’s sponsorship of a dragster racing car appeared in the motoring press.

Part of our  work with Head Office also included copy writing articles that appeared in Making-Money and Business Franchise.  These appeared alongside adverts that Signarama placed to support their attendance at various franchise show.

Such was our rapport with the Franchisees that we were asked to work with a group of twelve on a project to show case their expertise.  This project followed the sale of the UK Master Licence and the Master Franchisor’s decision to stop supporting the previous PR activity.  During this time coverage appeared in a variety of Facilities and Education and University trade journals, and ShrewdPR also copy wrote a series of articles on Signarama’s behalf that appeared in Facilities Management UK.

We are currently retained by their Milton Keynes franchisee to handle all their media relations and run their Social Media accounts.